Flights to Mexico City in 2021

Which day is cheapest to fly to Mexico City?

The cheapest day to fly to Mexico City is usually Thursday. At the moment, Monday is the most expensive.

What time of day is cheapest to fly to Mexico City?

At the moment, flights in the morning are likely to offer the best value for money for your Mexico City trip. A flight in the evening will more often than not be of higher cost.

Because of its high altitude, Mexico City has pleasant summers and mild winters, making it an ideal holiday destination all year-round. May is the warmest month with temperatures reaching the high 20s, and January is the coolest with average temperatures within the teens and 20s, but night frosts are possible. The rainy season is June to September with July bringing the most rain. February is the driest month. December and January tend to have the most smog, although the pollution levels are improving.

In March the city is taken over with cultural events for the three-week Festival del Centro Histórico. The holiday periods of Semana Santa (Easter week) and Christmas to New Year are particularly busy with Mexicans visiting and tourists booking flights to Mexico City. During the month of Easter, Mexico City showcases artistic and cultural talent from the local community. Mexico City’s Annual Festival features entertainment in the form of opera singers, orchestras, theatre groups and dancers, and is one of the liveliest and most energetic festivals in the country. February is an even busier month for Mexico City as it hosts its own dynamic and colourful carnival. Visit Mexico during this time to see thousands take to the streets in high spirits to have fun, party, dance and sing well into the night. Mexico City Carnival is a raucous affair which is on par with the famous Rio Carnival, so if you are looking for a relaxing trip, avoid travelling during carnival season.

With its mild climate, you will be hard-pressed to find an off season in Mexico City. For fewer crowds and cheap flights to Mexico City, a non-holiday period is the best bet. Take a cheap flight to Mexico City to enjoy quieter celebrations like Fiesta de Santa Cecilia, which takes place in November, in Mariachi Square. The festival pays respect to the patron saint of musicians, St. Cecilia, with a tribute concert and an outdoor party involving dancing, drinking and singing.

The smell of roasted corn, Aztec dancers showing off their moves, and ‘healers’ beckoning tourists to try a miracle cure: this is just a regular Monday afternoon in Mexico City. This vibrant capital city was once the capital of the Aztec Empire; today it’s one of the most populated cities in the world. Most travellers flying to Mexico City stop over briefly on their way to other regions in Mexico, but stay a little longer and you’ll quickly discover what inspired the likes of Frida Kahlo and Diego Rivera.

If taking a flight to Mexico City, wandering through the streets is the best way to embrace the city’s heritage and savour some authentic Mexican street food. The area of Zocalo is a good starting point from which to explore the city. In Zocalo, Mayan ruins live beside modern buildings and colonial churches, while dramatic Rivera murals adorn the walls. Art lovers should make the museums their first stop and Kahlo fans cannot miss a trip to the Museo de Frida Kahlo in La Casa Azul and Museo Casa Estudio Diego Rivera y Frida Kahlo, where the famous couple once lived.

Travel to the Aztec Templo Mayor and the jaw-droppingly huge Teotihuacan to really get an idea of the city’s history. Or go and see some of Mexico’s colourful pro-wrestling at Arena de Mexico, which is in complete contrast to the precious relics found at the Templo Mayor. As in the rest of the Americas, football is a national passion so a day out at the lively and vibrant Estadio Azteca is a must. However, be sure to pack some earplugs for your visit to Mexico City – the roar of the crowd can be deafening.

El Zocalo, or Plaza de la Constitucion, one of the world’s largest city squares, is located in the middle of Mexico City’s historic centre. On one side of the square is the Presidential Palace. The magnificent colonial building was once the site of an Aztec Palace and displays murals inside narrating Mexico’s history. The other side of the square is home to the Metropolitan Cathedral, which sits on land once sacred to the Aztec people. Inside the ornate cathedral you will find the King’s Chapel and gilded altar. The city square is always bustling with activity, and tourists can mingle with vendors, buskers and traditional Aztec dancers. It’s also a location for demonstrations, protest marches and festivals.

Getting around Mexico City

Don’t worry about getting around Mexico City, one of the biggest cities in the world. The public transport system is efficient and cheap. The metro runs from early morning until midnight and is clean and easy to use. The bus system is also extensive, but you might find it easier to use if you speak Spanish. Minibuses can be a better option than buses, since they are smaller, faster and more comfortable. They can drop you off anywhere along their route. With so many people in the city, public transport can be very crowded during rush hour. Be aware of your surroundings during rush hour and at night; crime levels are high on the subway and buses. Central Square’s cobble-stoned streets can be a lovely area to walk around. If you want to take a taxi, be safe and call ahead for one, instead of hailing a cab. Many hotels and restaurants can help you get a cab. If you’re planning on driving in the city, know that it can be a tricky place to manoeuvre and prices are high. Additionally, cars are prohibited from driving in the city one day a week. Find out which days you are restricted by checking the last number of your licence plate against a list at the tourist office. When smog levels are high, as they are in December and January, numbers can come up more than once per week.

Getting downtown from the airport

The main airport for those taking flights to Mexico City is Mexico City International Airport (Benito Juarez) (MEX). There is a Metro service from the airport to downtown Mexico City. Taxis are regulated and passengers can pay in advance at the taxi counter in Arrivals. There are also suburban bus services. Some hotels offer a pick-up service, however it is worth checking their charge as it’s generally cheaper to take a taxi.

Cheap flights to Mexico City in April, May 2021 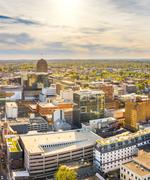