The best prices found for GRU flights for October, November

Cheap flights to Sao Paulo found for this year

When is the best time to book a flight to Sao Paulo?

Booking 46 days in advance of your planned departure date is, on average, the best time to get cheap flights to Sao Paulo. The general trend is that the closer you book to the departure date, the more expensive your flight will be.

When is the best time to visit Sao Paulo?

Sao Paolo is the business capital of Brazil with 75 per cent of the country’s fairs and congresses held in the city, making it busy year-round.

From April to December the city also hosts film and music festivals, and fashion and art exhibits. Fashion enthusiasts should book their flights to Sao Paulo in either January or June to experience the city’s very own Fashion Week. Considered as the top fifth fashion week in the world after New York, Paris, Milan and London, the show brings exciting new Brazilian designer labels to the catwalk. Spectators can also enjoy watching a handful of Brazil’s top models showing off the latest haute couture trends.

If the world famous Rio Carnival seems too overwhelming, why not book flights to Sao Paulo for their very own carnival from late February to early March which still attracts more than a million tourists every year. Similar to Rio Carnival, the event features a magical and joyful atmosphere with display of colour, laughter and culture. The main attraction of the event is the samba school performances and other carnival festivities are carried on all over the city.

If you are planning on visiting Campos do Jordao in November or December, book your stay in advance. Flights to Sao Paulo and hotels book up fast during the summer season so it’s a good idea to book ahead for the best deals. Make reservations for beach holidays as far in advance as possible.

Rain is likely during the winter months, but discounted accommodation and cheap flights to Sao Paulo can be found from July to August.

Sao Paulo can seem intimidating and cold to first-time visitors, but Paulistanos make every effort to welcome tourists and their alegria (joy) is infectious.

The first thing travellers coming off their Sao Paulo flights will notice is that the city is a true melting pot. Immigrants from Japan, Italy, Portugal and Lebanon have settled here over the years. The Liberdade neighbourhood, for example, has the largest Asian community with the best dim sum this side of China. It’s precisely this cultural diversity that makes the city so cosmopolitan and exciting to visit for a few days.

Exploring the city on foot is really the best way to avoid the unbearable traffic. Stop by its world-class art museums. Art collectors and enthusiasts from all over the globe come here to visit the Pinocoteca do Estado and Museu Arte Sao Paulo (MASP), both of which house some stunning Brazilian art as well as Picassos and Monets. The city is also a shopper’s heaven and you can find just about anything from international designers to local crafts. After a long day of touring the city treat yourself to some cold chopp (beer) and picanha in an “all you can eat” Churrascaria.

Sao Paulo’s climate is described as high-altitude tropical. Summers are rainy and temperatures range between 19 and 27 degrees. Locals like to say that you can experience four seasons in one day, and are expert at layering. Spring and autumn are warm and dry; autumn temperatures average 23 degrees. Winters are sunny and dry with temperatures in the 15-degree range.

Getting around Sao Paulo

Between Sao Paolo’s convenient public transport and walking, you won’t have any trouble getting around town. The subway can take you almost anywhere on its two main lines between 5am and midnight. For the rest of the town, you can take a bus. They run frequently, so just flag one down when you need to hop on. During the day the city is safe, but you should check with your hotel about where to walk safely at night. Taxis are the safest way to get around at night. Don’t worry about finding a taxi – there are plenty in Sao Paulo, and they can be hailed on the street or picked up at a taxi stand.

Getting from the Airport to the City

The main airport for travellers taking flights to Sao Paulo is Sao Paulo-Guarulhos International Airport (GRU) which is located 15.5 miles (25 km) northeast of Sao Paulo. Taxis are available outside the terminals; visitors are advised to take the prepaid taxis, they are usually a little more expensive but give peace of mind. There is also an airport shuttle bus, which drops passengers off at the main hotels. Public buses are also available.

See alternative destinations where airfare is generally forecast to be close to Sao Paulo flight prices. 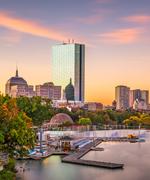 Not set on Sao Paulo? See the cheapest flights to Thailand. Airfare prices updated on October 21, 2021.